One man's struggle to make sense of it all

My buddy Ken tells a great story. It’s about his adventures in China.

Let me preface this by explaining that there is little that rattles Ken in the business world. He has gone head to head with some tough negotiators and successfully built his business up from nothing to a mult-million dollar operation.

In the natural world, however, he is not as fierce.

A few years ago when Ken was developing his business network in China, he had a chance to stay in the guest cottage of a potential supplier. “Michael” was kind enough to explain that the cottage was a bit off the beaten path and may have some insects sharing the space. Ken gladly accepted, partly for the chance to rest and partly for the opportunity to learn more about Chinese culture.

When they arrived, the first thing they noticed was the huge wicker bowl of fruit on the kitchen table for them. It was particularly gorgeous to Ken who refused to eat anything in China that he wouldn’t eat in North America. Yes, it’s true: every time Ken went to China, he lost about 10 pounds…

When Ken grabbed the bowl, three huge cockroaches shot out from underneath it and skittered off of the table and under the living room curtains. Ken, not wanting to embarrass anyone, turned to his Chinese host and said, “DID YOU SEE THAT? DID YOU SEE THOSE?? WHAT WAS THAT? THE FRUIT MUST BE BAD!”

His guide calmly reminded him that the presence of cockroaches around fruit is somewhat of a blessing because it means that the fruit is actually quite good. (Chinese cockroaches are actually finicky). Ken was less than relieved.

All the excitement meant Ken had to “go”. He dropped his luggage in his room and headed for the bathroom. Closing the door, he quickly lifted the lid and, to his surprise, watched as an entire colony of ants climbed out of the toilet bowl and marched across his shoes,

“I need a shower,” he thought to himself. Entering the bathroom, he was stopped in his tracks by the largest spider he had ever seen.

“I’m not afraid of spiders. I’m the guy that kills all the spiders for my wife. But this thing had hair on it’s back. And it was cracking its knuckles…” Ken explained.

Ken ran to his room, got his shoe out of his luggage and, standing at the very outside edge of the shower stall, started throwing it at the spider, who by now was drooling. Finally he nailed the thing and when it fell to the floor of the shower, spent the next ten minutes whacking it until it was nothing but bones and hair.

It had been a long day of travelling and meeting new people and it was definitely time for sleep. Turning on the light to his room, Ken was dismayed to hear the unmistakable sound of hundreds more unidentifiable insects finding hiding places in his bedroom: behind the curtains, in the closet and under the bed. “This is bad,” he thought. “If I turn off the lights, they will feast on me. If I leave the lights on, I won’t sleep.”

I want to pause right here and remind you, dear reader, that our hero is a resourceful man. He has, after all, made his way to China to find the suppliers he needs to grow his business empire into a multi million dollar concern. Know that if he needs to sleep in a room full of carnivorous insects, he will find a way to do it.

“Socks,” he thought. “I can keep the lights on and cover my eyes with my socks.”

This almost worked well. His dress socks were just dark enough to block out the light and let him fall asleep. Then his head would roll to the side, the socks would slide off his head and he would wake up, anxious and exhausted.

A savvy business man knows a good idea when he sees one and builds on it. Ken knew the bedroom lights and black dress socks were a winning combination. If only there was some way to secure the socks to his head so that he could get a good night’s sleep in this cottage in China. Then his eyes came to rest on his open suitcase–most specifically, his boxers.

Our intrepid hero figured out that if you first apply the clean boxers over your head (upside down), you can reach in through the leg holes and apply your socks to your eyes and they will stay there all night.

Recognising that this was indeed a good plan and that he was bound for a solid night’s sleep, Ken shuffled to the bathroom to relieve himself.

He stopped dead in his tracks.

The one he killed with his shoe in the bathroom.

It took a few seconds for him to recognise that the spider was moving, but it was still dead. All of the toilet ants were celebrating a successful night of hunting. He felt strangely relieved. He knew it was the onset of madness….

The evening passed quickly and Ken slept deeply. He awoke, underwear still on his head, having survived the night. As he peered around the room, he noticed that at the foot of the bed, between his ankles, was a fist sized beetle. Resting. Closer inspection showed him that this giant, meat eating insect was resting.

Somehow, while Ken slept peacefully with the lights on and his eyes protected with his underwear socks, something bigger than this huge beetle had brought it onto the bed and devoured it entirely between Ken’s ankles, then left the carcass there for him to clean up.

Foreign customs are hard to pin down. 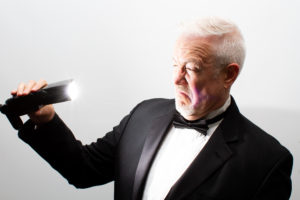 Who Is This Guy?

Who is Mark Thrice and why has he never been seen in the same room with billionaire amateur detective John Hollingsworth?

Maybe there are clues in his book, Halfway To Crazy…available through Amazon right here.

Please make sure that you have installed the Profile Builder plugin.